It been a while since the last blog post because I was taking a break from screens over the summer holiday break, and because the next post I want to write is about Jane Hapgood, nee Wearing/Wilson/Morris? and her mother Maryanne Middlewick/Wearing/Clark? Two women with a series of certificates where no two set of details are the same… That post is taking a while to tackle..

Instead, I am sharing a postcard from Constance “Connie” Newton b1891 to her nephew Jeffrey Gordon Hapgood (my grandfather) sent in 1910. The postcard ended up with one of Jeffs daughters and the photos of this postcard were sent to me by my cousin S*, and her Mum (who would absolutely positively not want her name on the internet). S* said “We found this postcard in amongst mum’s things when we were looking for something else. It’s a postcard to mum’s dad from his aunt Connie. Jeff would have been 11. Mum thought you might like a copy“. And she was right!

The postcard was sent on the 10th February 1910, when my grandfather Jeff Hapgood would have been 10 years old. Coincidentally, the photos of the postcard were sent to me on 10th February 2021 – exactly 111 years later, to the day! This is a cool coincidence worth mentioning- but I am far too scientific to believe in any other kind of interpretation.

Aunt Connie was Constance Flora Newton, born on 20 Aug 1891 in Milton, New South Wales. Her parents were Joseph Newton b1849 and Anne Jackson b1852. They were both English, and emigrated to Australia before marring in Ulladulla, New South Wales, in 1871 . The Newtons and the Jacksons will appear in the blog at some point in the future. Joseph and Anne had 13 children over 40 years… one of which was my grandmother Clara Rose Newton, her sister Sarah Ann Newton b1875 (who married William Paye and also lived in Kin Kin, next door to her sister Clara and the Hapgood farm) and Constance “Connie” Newton.

I dont know much about Connie or her life other than she married Albert H Trudgeon b1891 in Byron Bay area, New South Wales in 1916 and had two children – Gordon Garth Trudgeon 9 Oct 1920 & Albert Guy Trudgeon 25 April 1923. At the time she wrote the postcard though, she was about 20 years old, not yet married, and her nephew Jeff was about 10.

The front of the postcard shows a man in a military uniform sitting beside an english stream with his arm around his sweetheart, wearing a floppy hat and holding a bouquet. There is poem at the bottom of the postcard called “On the Banks of Allan Water” which turns out to be the first verse of an old Scottish song. By the miracle of the internet there turns out plenty of recordings of different versions, but this version was the first to pop up. Adelina Patti was an Italian opera singer who was around and apparently popular in the era, and recorded a version of this song in 1905. Maybe this was a song they knew and sang?

The postcard is addressed to “Master J Hapgood, care of Mr W Hapgood, Mullimbimby”. This is in the Northern Rivers area of New South Wales, where William Hapgood and Clara Rose Newton lived for a few years, after leaving Milton but before arriving in Kin Kin in 1913. Connie gives her address as “Glenmore” which I assume is a house/property name. The postcard says:

I received your nice PC (postcard) and was pleased to hear from you. Milton told me to tell you he will write soon. He has joined the Cadets at Bangalow. I think Arthur will be down this week and then Isabel and we(?) are going to start for sydney on the 19th. tell Phyllis Ina and Beat? will write soon.

Love from Connie (written up the left edge of the postcard”

Initially I wasnt sure who all the people were that were named, but my cousin S* sent more information once this post was initially published (Thankyou!!!)

I don’t have a photo of Jeff Hapgood in 1910, but I do have a photo of him a few years later in about 1914. This is also apparently a postcard (but I don’t have any copy of the back…). He is sitting on a white horse, which is the one he rode on when he and his father William rode up from Northern Rivers to Kin Kin to build the house before the rest of the Hopgood’s arrived. He and the pony are sitting and standing straight. He has a striped shirt, some kind of tie or scarf, trousers with braces, boots and a jaunty looking hat. They are standing on the edge of a stream or dam of some kind, out in a paddock or the bush somewhere.

Its such a lovely postcard from Aunt Connie to her nephew Jeff, and lovely to think it has been kept all this time by Jeffs family. I am so pleased to see it, and to find out a little more about the Newton family while learn and listening to the “Banks of the Allan song”. Its been a charming little snippet episode of family history.

(If anyone reading this has other family treasures to share, please get in touch! karenhapgood [at] gmail.com Corrections (including typos!), additions and updates all welcome) 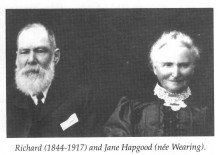 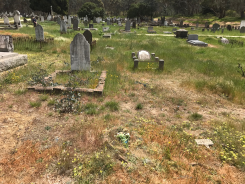 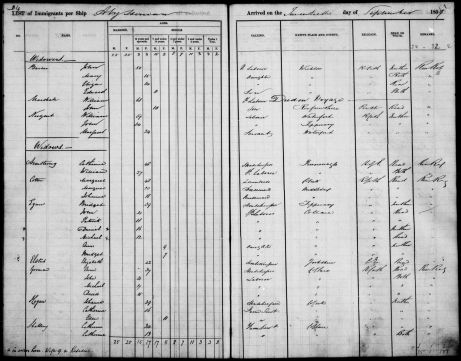 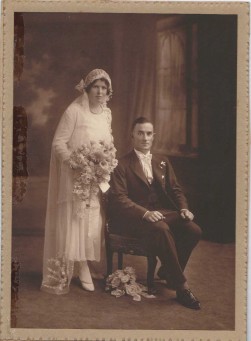 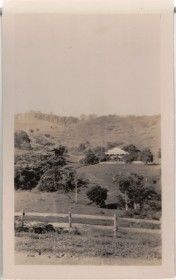 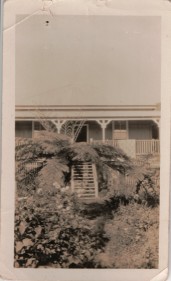 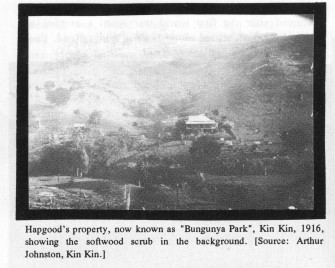 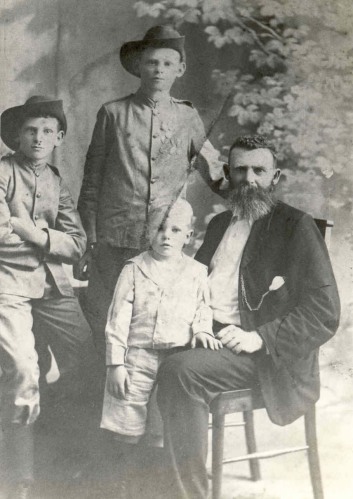 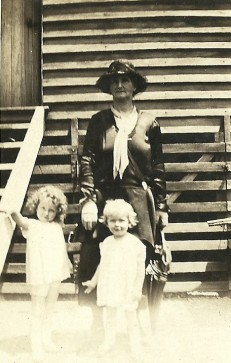 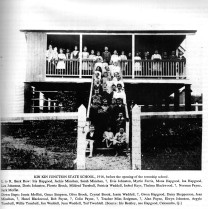 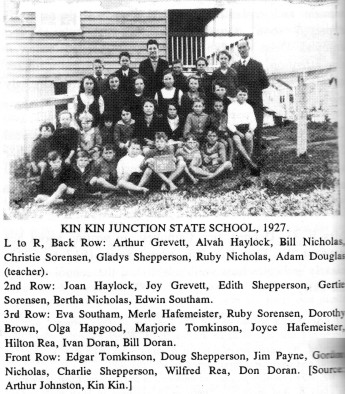 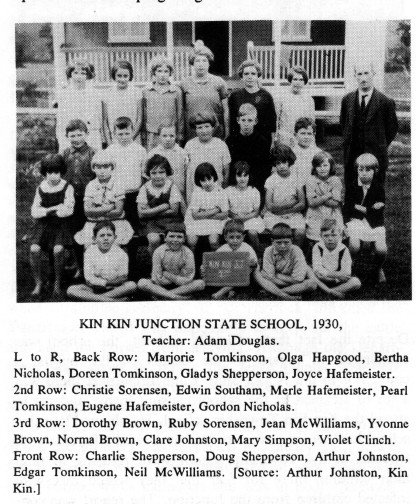 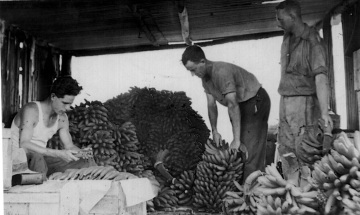 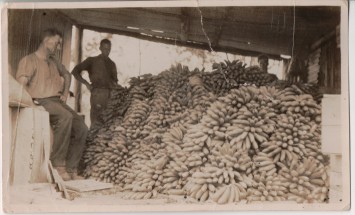 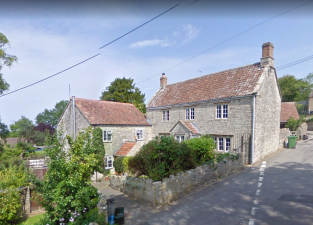 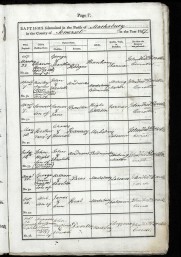 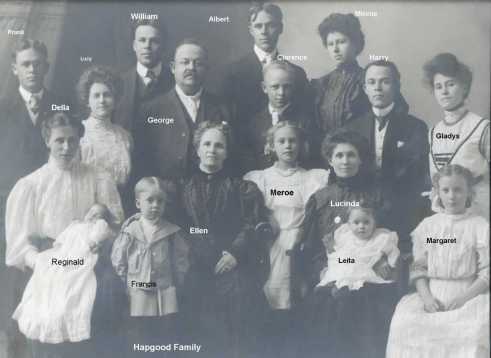 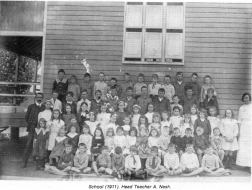 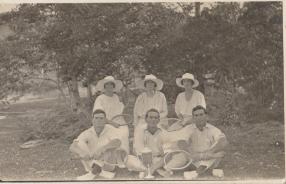 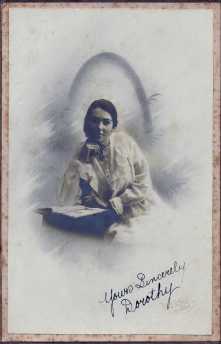